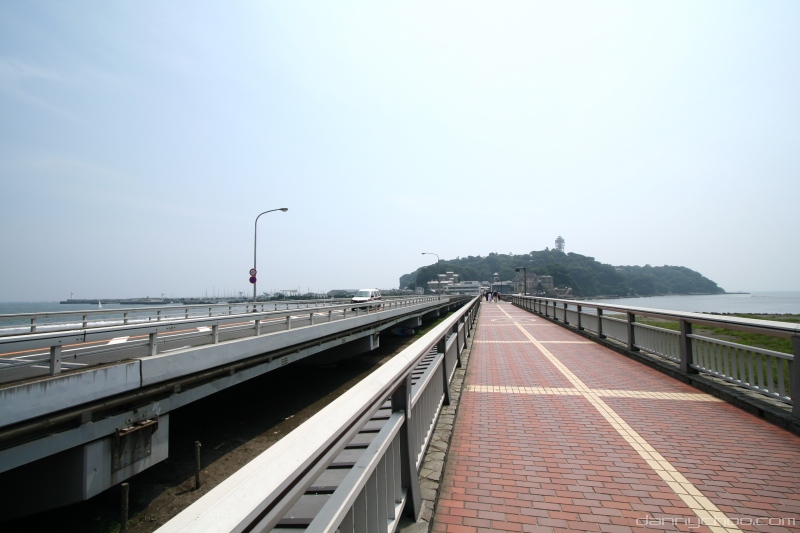 Up until now, my wife and I had been spending most of our leisure time overseas and decided this year that we should stay in country and see more of Japan. Was in Kyoto and Osaka a few months ago and will be in the tropical part of Japan in a few weeks - Okinawa.

Managed to get some time off recently and decided to go to a place called Enoshima - a seaside town located in Fujisawa - a one half hour drive from Tokyo. If you are over in Japan for the summer, Enoshima is a good choice for those who want to get away for a bit from the hustle n bustle of Tokyo.

Left the house at about 7.30AM and got to Enoshima at about 9-ish. Found a place to park nearby. The parking rates are cheaper than Tokyo at 400 yen per hour - Tokyo being 600 yen per hour.
Do leave early as parking spaces get nabbed before you know it and you will still be paying the same even though you are parked miles from the beach.

If you are going by train, the station is in a location near the beach and island so you dont have to walk for ages before you collapse from the heat - its rather hot at this time of year.

This pic was taken on the bridge leading away from the beach to Enoshima island which you can see in Google Maps. 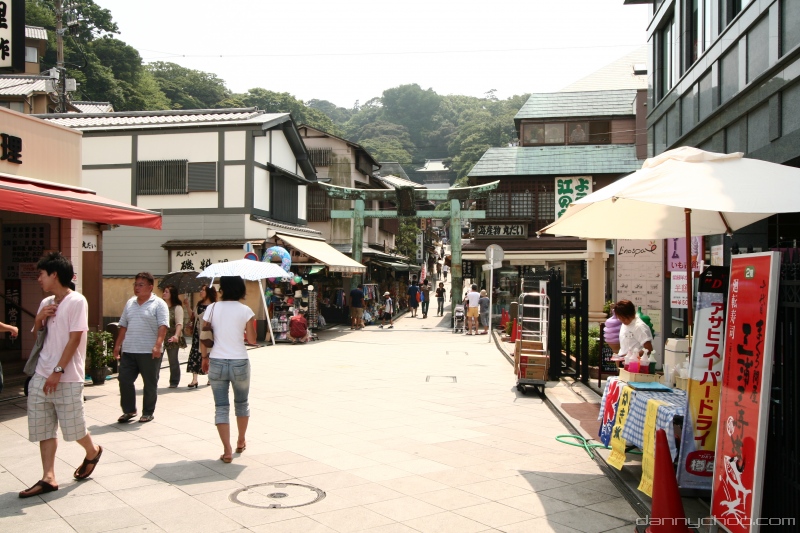 At the end of the bridge is the island entrance where you can buy some potato ice cream, Senbei ( Japanese rice crackers ) and other souvenirs. For some reason I could not find any gundams or figures. 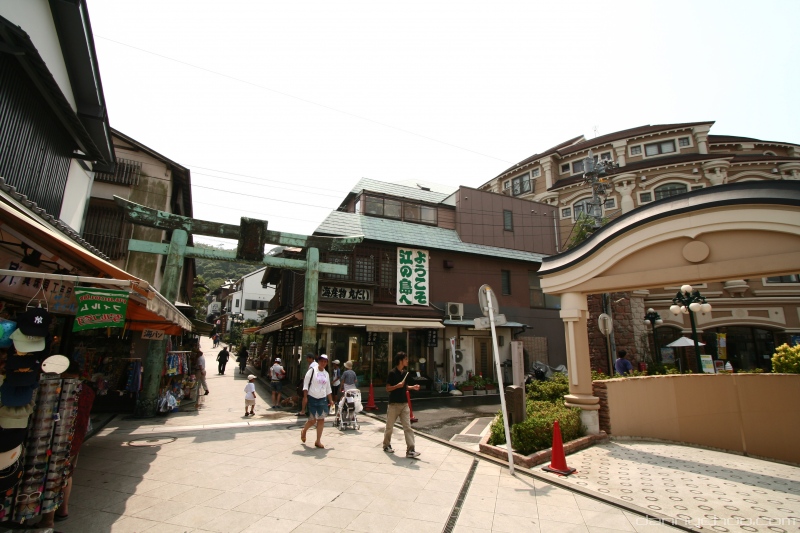 The island may seem small from the google maps link but be prepared to spend a few hours in the island as its bigger than one may think. 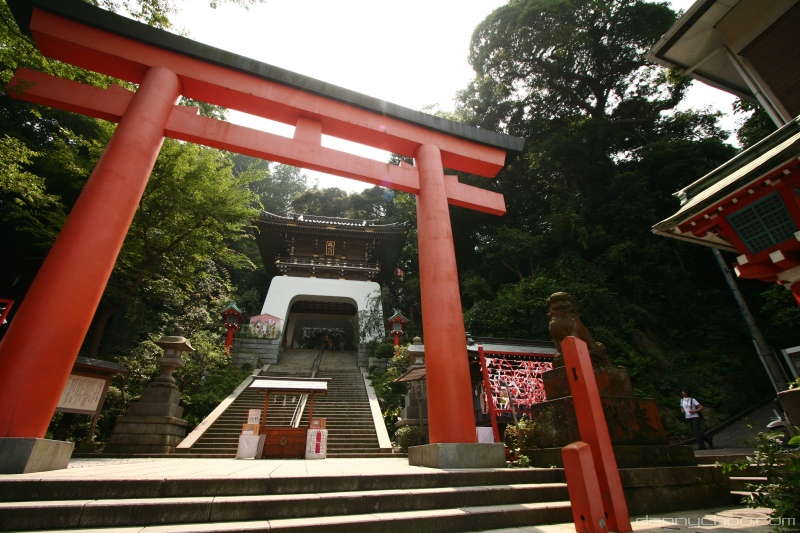 if you are into temples then you will like Enoshima as there are plenty of them. 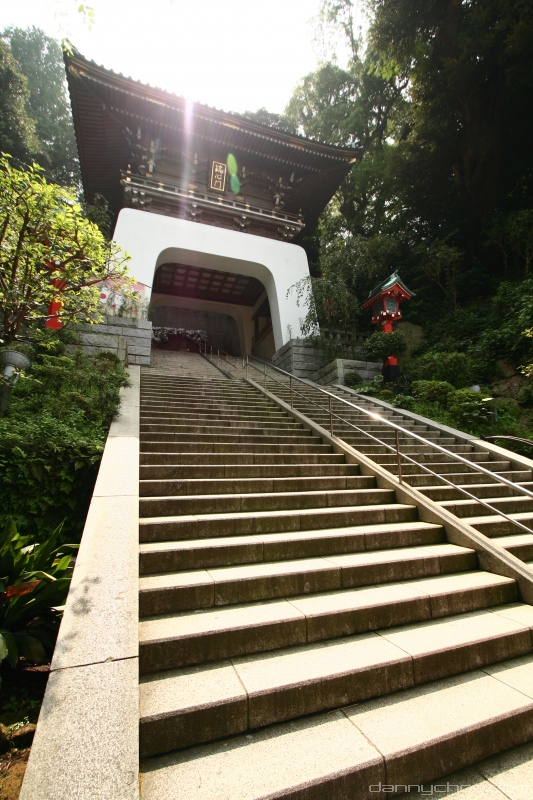 And if you like steps then you will love Enoshima as there are plenty of steps too! 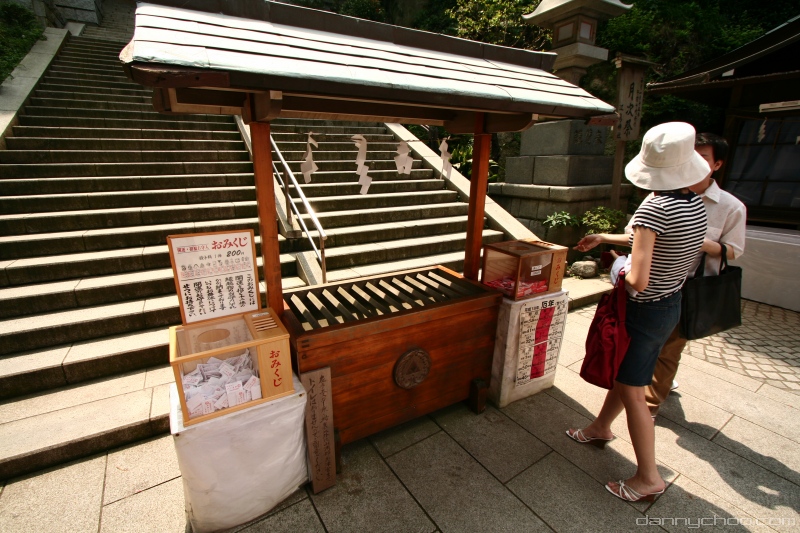 I mentioned this before in a previous article and forgot what it was called at the time.
This is Omikuji where one pays a few hundred yen for a piece of paper which has ones fortune written on. If it says something like, "On your way home today you will find a wad of money in front of your house", people tend to be happy and keep the little piece of paper until they get home to find that it was a bunch of lies. This is when they chew up the dastardly omijuki and spit it out just before regurgitating as much flem as possible.

If the omikuji says "tomorrow, you will be ripped apart by a thousand wolves on your way to work", people usually break out in a sweat and tie the omikuji to a nearly fence to make sure the prophecy does not come true. 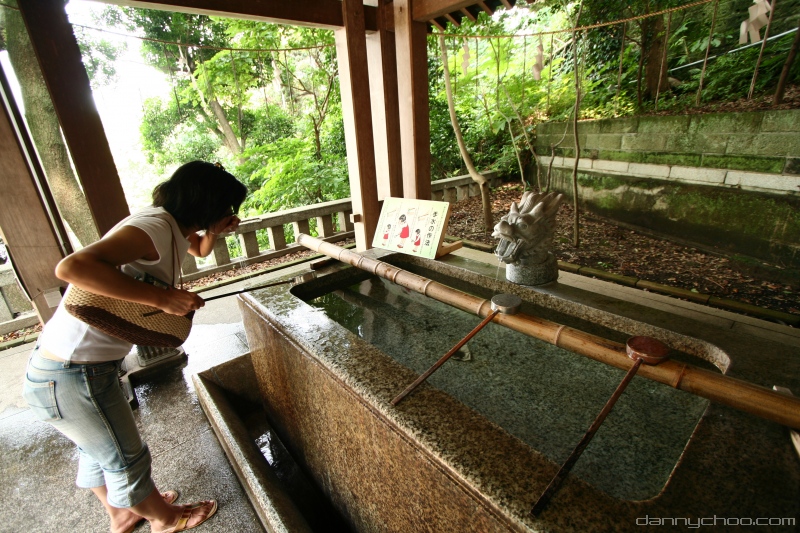 Many temples have this tub of water where folks use it to cleanse their soul of evil spirits. If you've been hearing voices at night time like "no more gundam for you this year" then I recommend a quick visit. 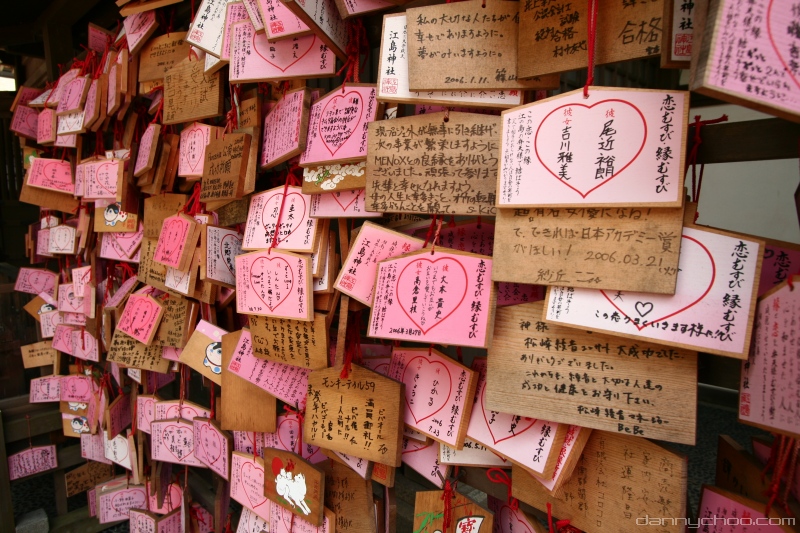 Forgot what this is called but what you do is pay for a bit of wood where you can write some sort of wish. Many folks write wishes of graduating from university successfully and some write how they want a boy friend better looking than Kimura Takuya ( you may be able to make it out in this pic ).
You can pretty much write what you want and hang it where you want too. 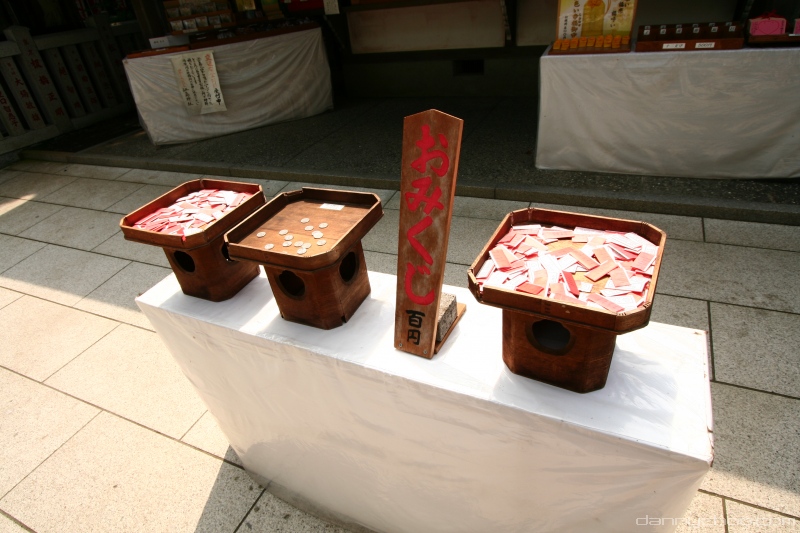 An un wo/manned omikuji stall. Stick 100 yen in the dish and take an omikuji. This is one of the things like really enjoy about living in Japan - the honesty of the folks. While I'm not saying that everything is kushty here, people are pretty honest. A nice change from living in Hackney where my mum was mugged for a few quid... 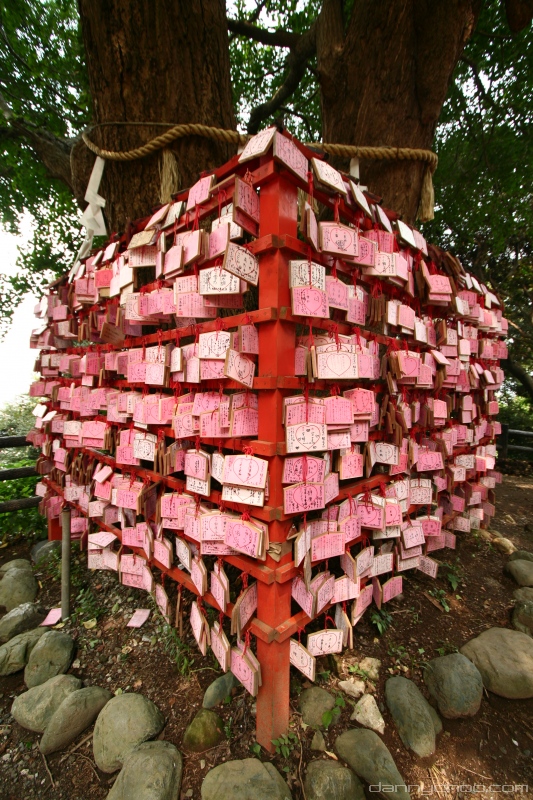 Not too sure hat happens to these things when the rack gets full though... 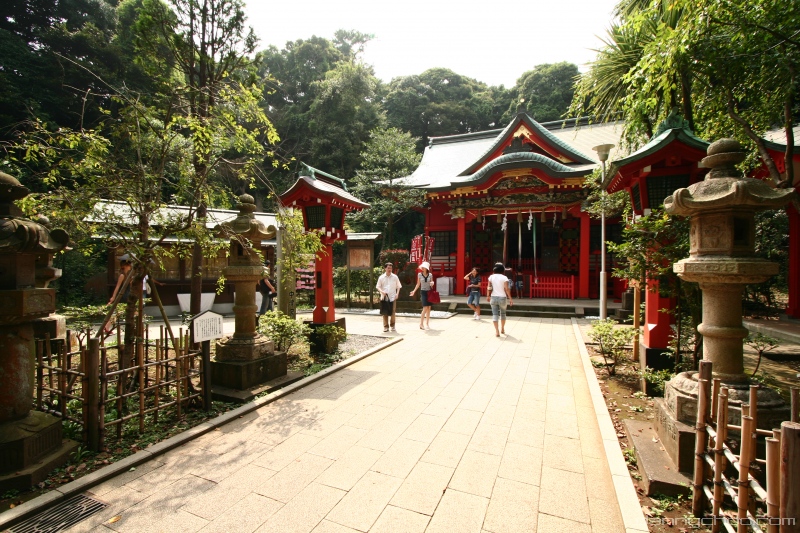 Did I mention that Enoshima had a few temples? 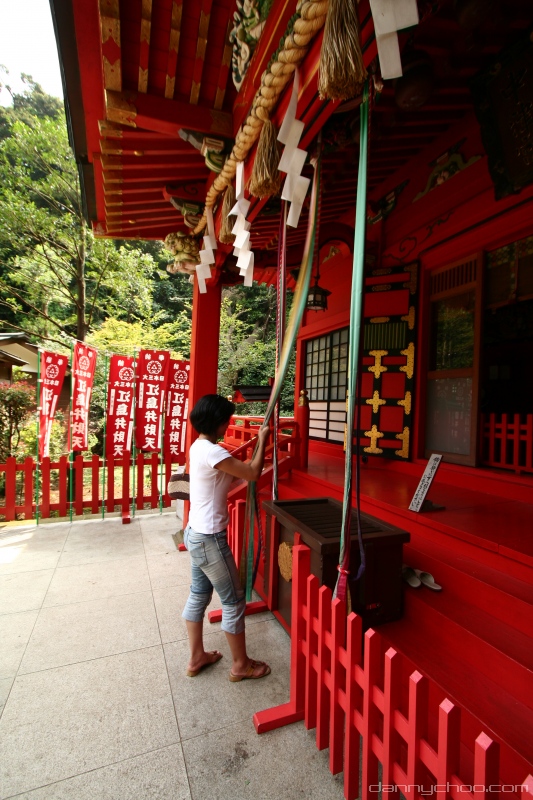 If you find that you keep on picking up bad omikuji which says things like "you will be eaten by a giant bat and digested over one thousand and five years", then I suggest trying another way of influencing your future. What you do here is to throw money into the box at the entrance to the temple. Then make a prayer and pull on the ropes/cloth attached to bells hanging from the roof. I think this is to wake the gods/spirits to make sure they are listening. 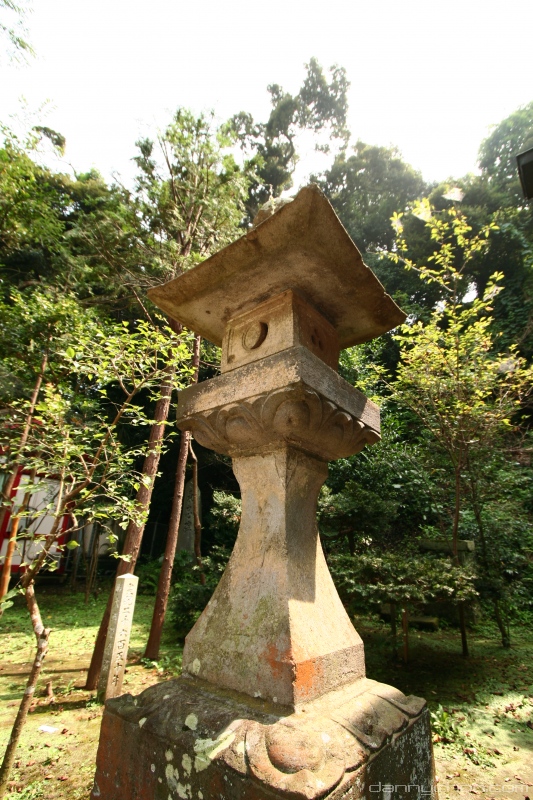 Dont know what the population is but people do live on the island. There are also Japanese style Ryokan for those who fancy staying. Costs about 8000 yen per night - two meals included. 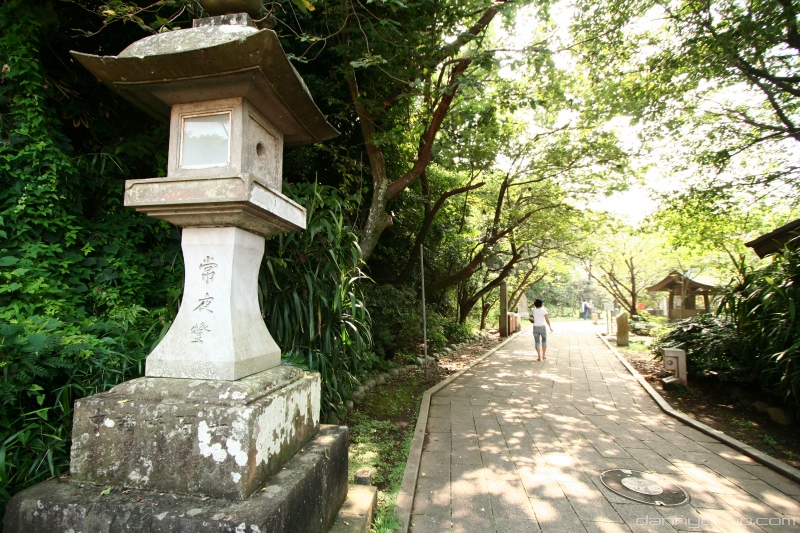 We went on a weekday so there wasn't that many people on the island. If you dont like crowds then avoid Enoshima on a Saturday during the summer holidays. 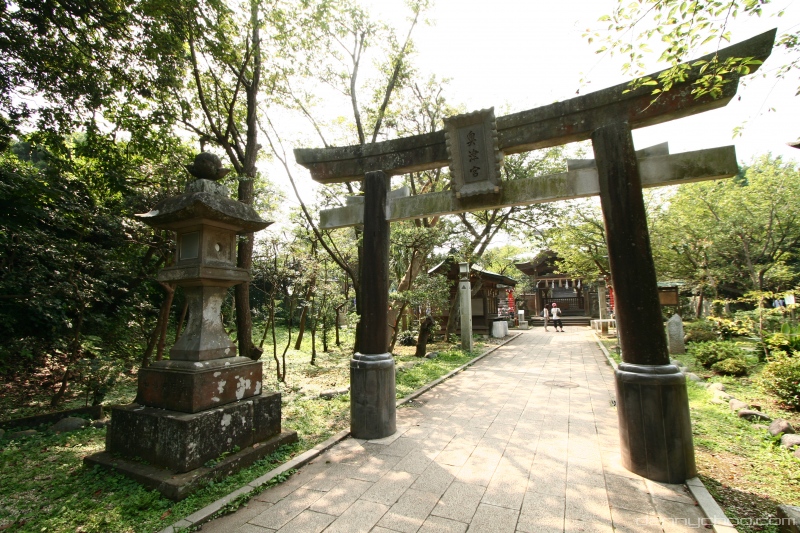 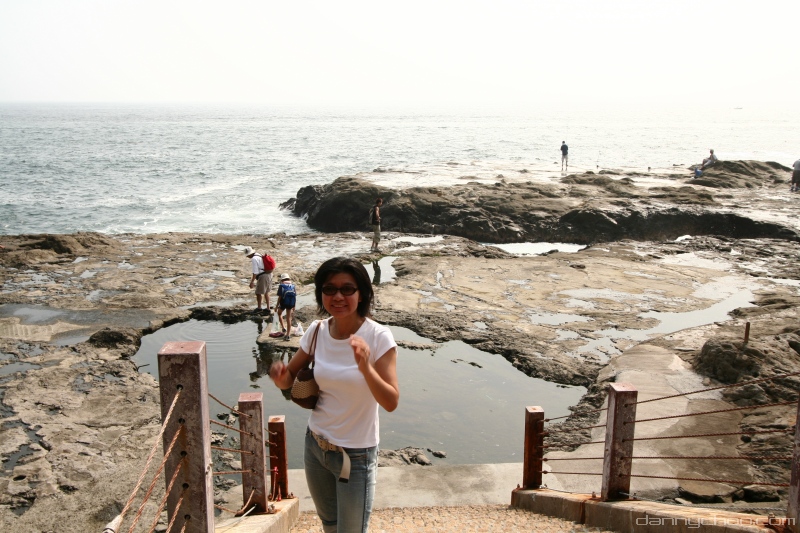 After traversing all the steps and temples, you get to the end of the island. You will find some folks sitting around staring at the ocean, some fishing, and some with their kids stealing the baby crabs - many people take the crabs home as pets. Most of the crab hunters where boys though so they could be taking the small crabs home to glue to their gundams feet. Just imagine your gundams walking up n down your desk. 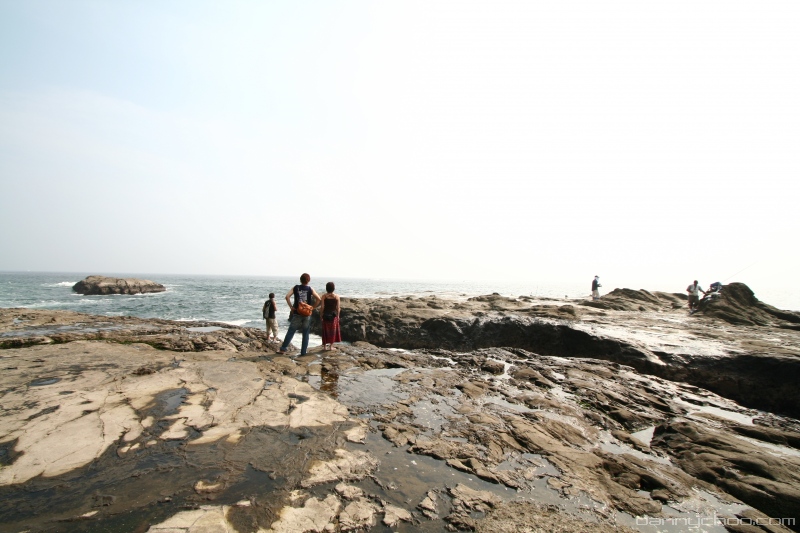 The water is much more cleaner on this side but you are not allowed to go in the water - you could if you want but it would be your last dip in the ocean as the waves can get pretty rough. 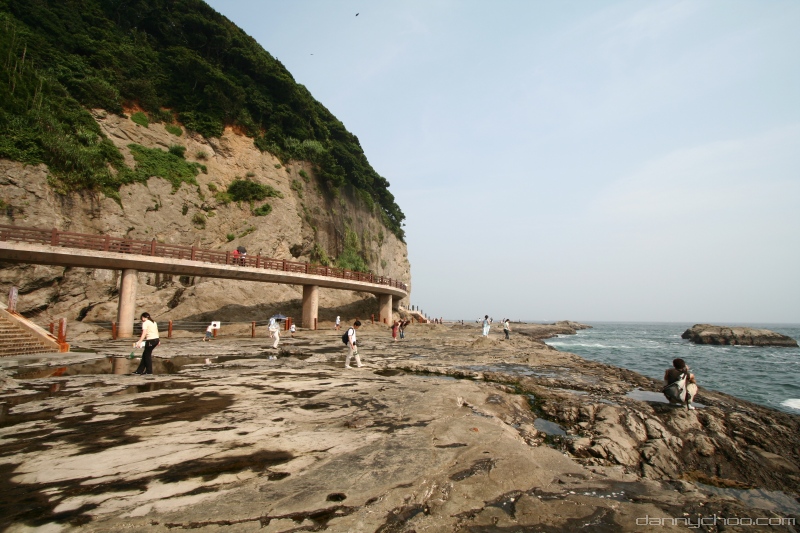 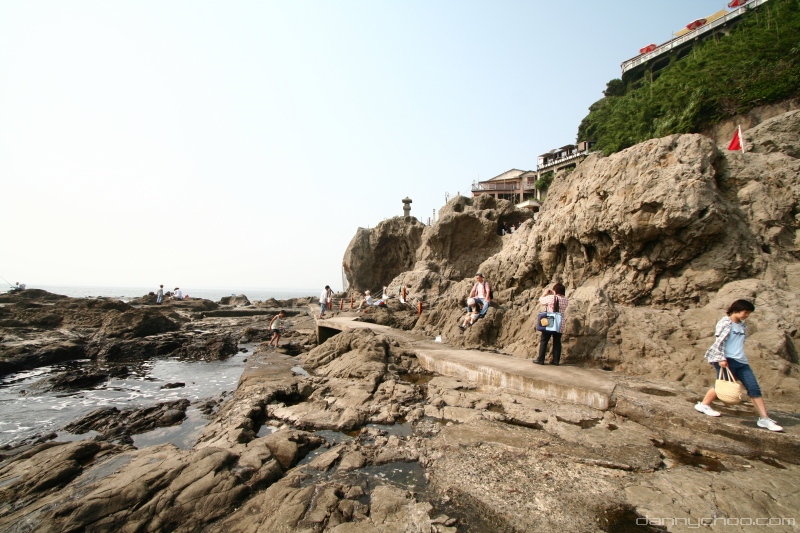 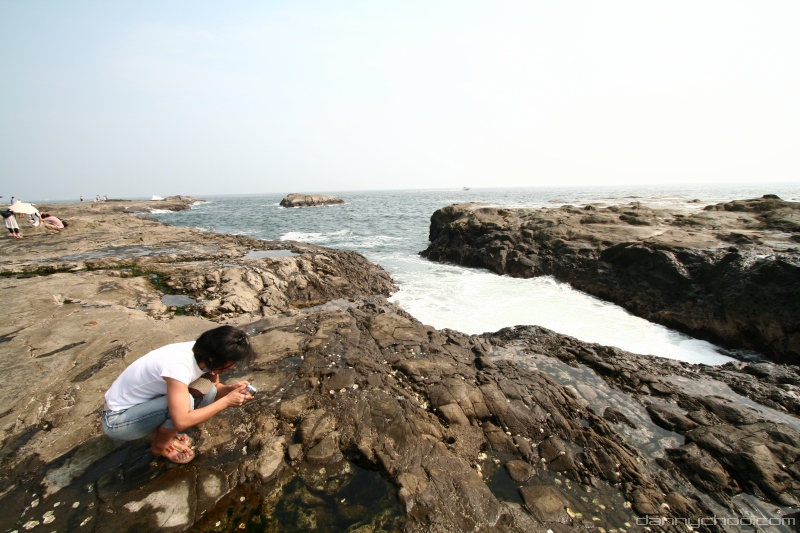 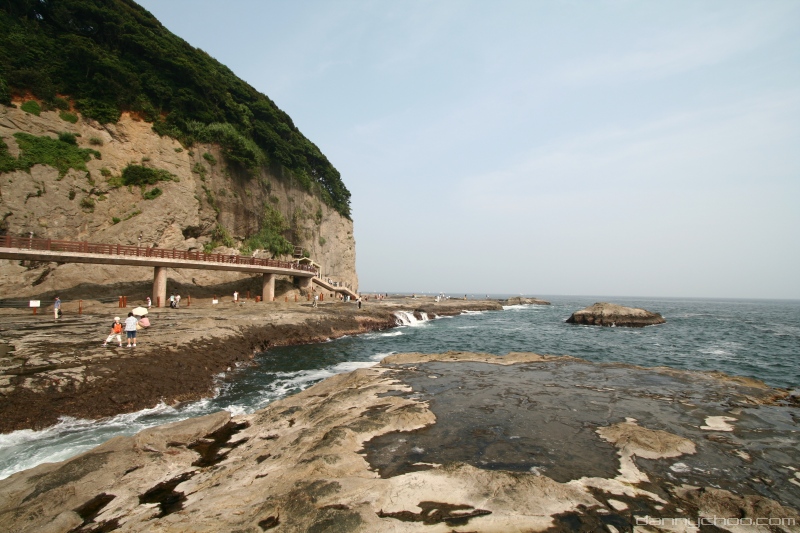 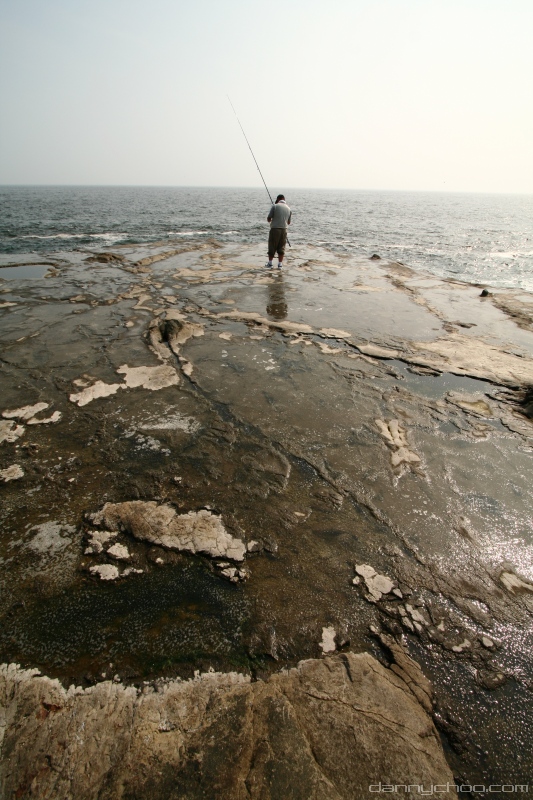 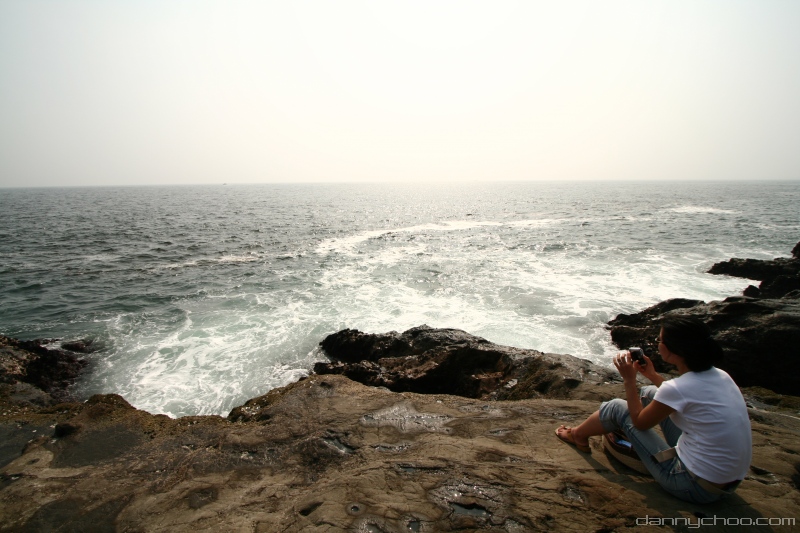 This is a place that you should not sit - unless you want to get splashed as my wife and I found out first hand ToT. 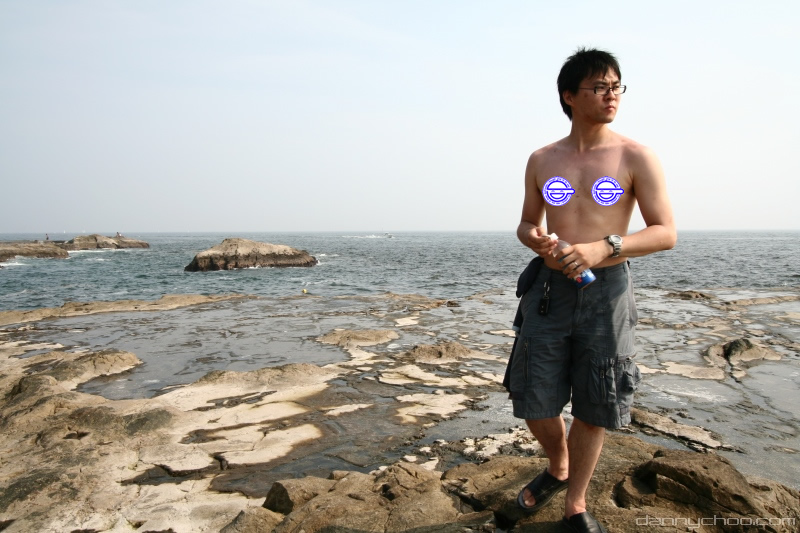 In the 7 years that I've been in Japan, I have never seen men go topless so decided to join in on the topless shenanigans when I saw many men show off their pecks at Enoshima. Actually, t'was extremely hot and you just end up boiling in a t-shirt.
Dont forget to take some sun lotion and also dont forget to put on your t-shirt when you enter a temple. 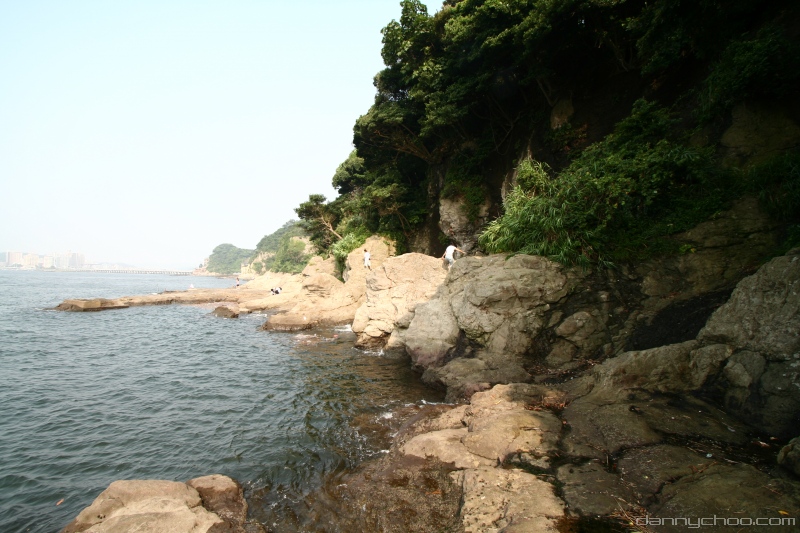 My wife and I decided that we would be a bit adventurous and decided to rock climb around the west side of the island back to the entrance. Neither of us was prepared for what awaited us around the corner though... 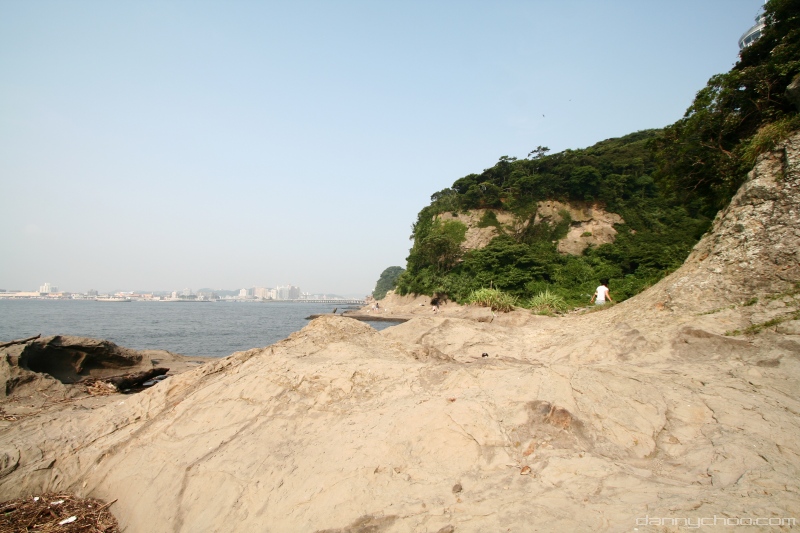 This is a pic of some relatively flat land but many parts where really tough to tackle. One part had us climbing up ropes and another bit towards the end had us getting to grips with a sheer rock face. The final bit was a 30 meter dash to dry land in between waves - kind of reminded me of that fire tunnel scene in the Stallone movie Judge Dredd (that was a cool movie). 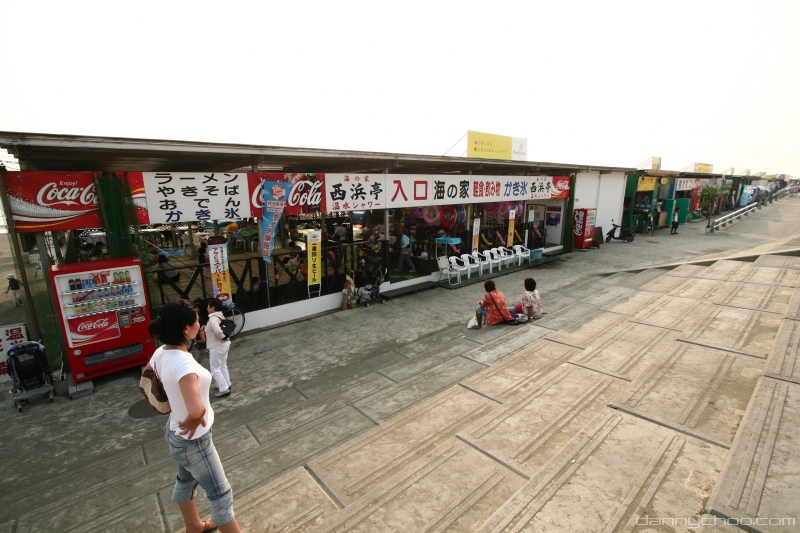 After making it back alive, we headed for the beach. This makeshift building is called Umi no ie (海の家（うみのいえ））or "Ocean House" - A place where you can leave your bits n pieces, get some grub and take a shower. There are no public facilities for you to take a shower after a dip in the ocean so you need to fork out 1500 yen to use these places. 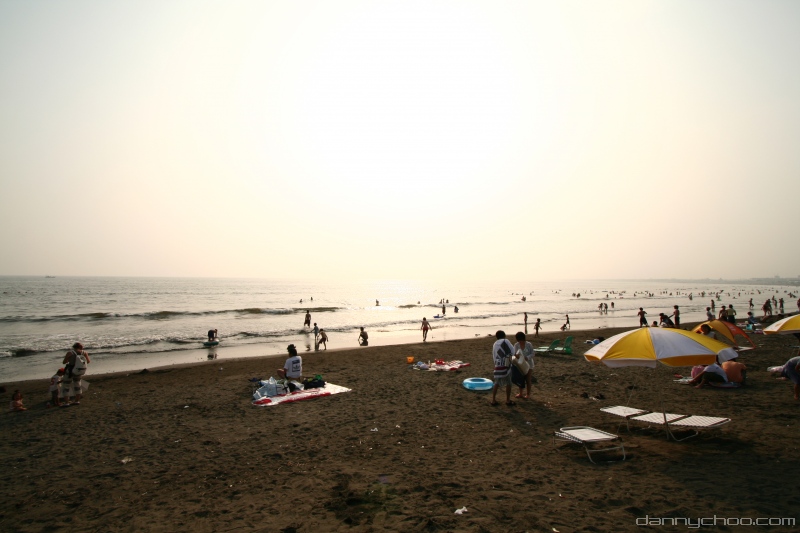 The ocean water is not clean at all - rather muddy and you want to get out after an hour or so. The place is very popular among young folks due to easy access from Tokyo. We could have driven for another two and a half hours to Shimoda where the sand is white and water crystal ( kind of ) clear but decided to enjoy the clear waters of Okinawa next month instead.

Enoshima is definitely worth a visit for those who live in or are visiting Tokyo. I would definitely go back just for the rock climbing alone but probably bring the armor next time...