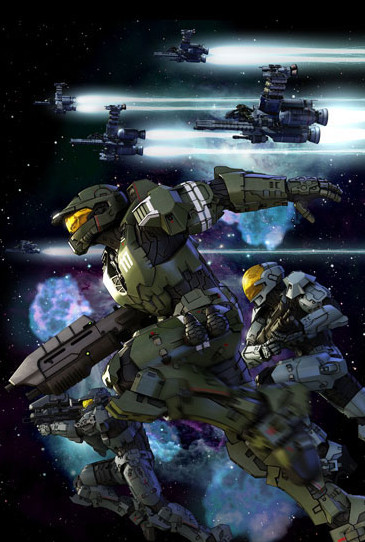 Halo gets the animatized (is that a word?)

Aramaki's short will cover the history of the Spartan warrior class from the games. Studio 4°C will animate two 30-minute shorts about "the entire 100,000 year history of the Halo universe." Toei's short "is outside of the official canon and pokes fun at some of the game's characters."

Warner Brothers will release the anthology on DVD, Blu-ray Disc, and digital distribution in early 2010. A trailer is planned for the Halo panel at San Diego's Comic-Con International (CCI) on Thursday, and Xbox 360 users can see a preview this fall on the Xbox Live service. Aramaki, Production I.G president Mitsuhisa Ishikawa, and Studio 4°C president Eiko Tanaka will attend the CCI panel, and the panelists will sign autographs after the panel at the Warner Brothers booth. The first trailer will also premiere on television on the Spike TV channel's GameTrailers TV with Geoff Keighley.
Via ANN with image from Inside-Games.

Me still have yet to play Halo. Looks like 360 users get all the fun with the DOA girls and Idol Master.

Original text from AnimeRookie below.The trailer says it all. From Gametrailers.