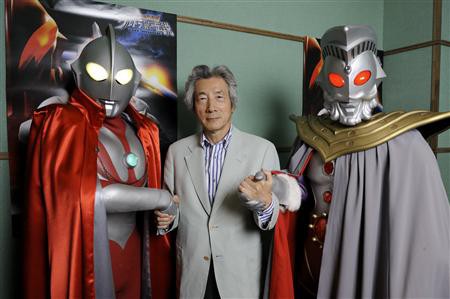 On the news this morning - politician Junichiro Koizumi who served as the Japanese Prime Minister from 2001 to 2006 has done the voice for "Ultraman King" in the up n coming Ultraman movie Ginga Densetsu which is due out this December.
The news clip below where you can see him performing.

And the PV below.

Its things like this which many folks who are not into Japanese culture don't understand and I get asked a lot in interviews by reporters - things like:-
Why do grown Japanese men still watch anime - I used to watch cartoons as a kid but only until I was 12.

Well for a start, folks like this interpret the world on what they consider to be standards that they set themselves. Just because they "don't", they expect others "to not" and anybody who "does" is strange by their definition. What surprises me is that some reporters who should have open minds (to enable them to convey an unbiased message) have the most narrowest minds one can possibly imagine.

A few reporters have tried to suggest that Japanese adults like to cosplay/read manga and watch anime because they are forced to find a channel to escape to from the stress of society. While this may be the case for a few, its certainly not the case for the majority.

But I do try to explain to reporters why instead of saying "you narrow minded git."

Folks in Japan are brought up on a diet of anime and manga. They watch it from a young age and is part of Japanese culture. Manga characters and mascots are to be found in all aspects of daily life from signboards at construction sites to instructions on medicine labels.
Characters from anime and manga are loved by all ages by just about everybody over here.

The question I would like to ask is whether you are surrounded and brought up on anime and manga in your culture and if not how you got into it?

I discovered anime and manga through Japanese game machines back in the UK. I went to the Japan Center in Piccadilly to pick up game mags which had a load of cute 2D girlies with anime info and manga too.