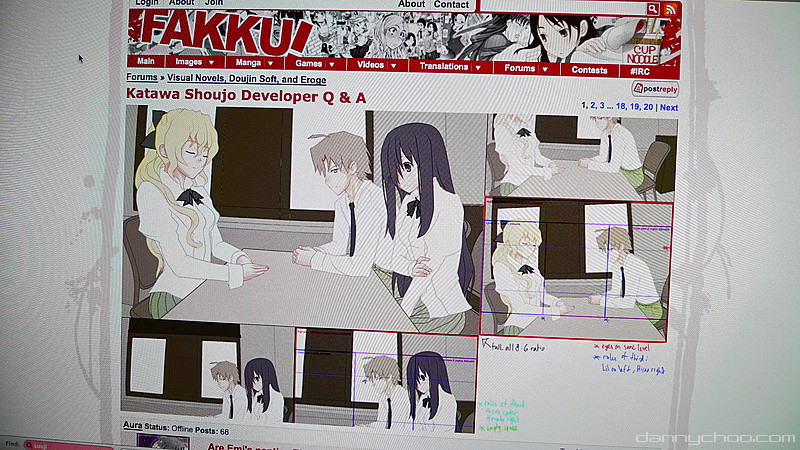 So you've seen a load of Japanese eroge but what about eroge developed outside of Japan?
Jacob at Fakku has a QA with one of the developers of an up n coming game called Katawa Shoujo.

Some nitty gritty about the game taken from the official site below.
Katawa Shoujo is a bishoujo-style visual novel set in the fictional Yamaku High School for disabled children, located somewhere in modern Japan. Hisao Nakai, a normal boy living a normal life, has his life turned upside down when a congenital heart defect forces him to move to a new school after a long hospitalization. Despite his difficulties, Hisao is able to find friends—and perhaps love, if he plays his cards right. There are five main paths corresponding to the 5 main female characters, each path following the storyline pertaining to that character.

The story is told through the perspective of the main character, using a first person narrative. This game uses a traditional text and sprite-based visual novel model with an ADV text box. Katawa Shoujo contains adult content, and is created using the Ren'Py scripting system.

Katawa Shoujo is under development by an international team of amateur developers, and will be released free of charge under the Creative Commons BY-NC-ND License. There is currently no release date set.
Not sure if there is any ero in it though.

In Japanese, the word "Katawa" is a derogatory term used to refer to handicapped folks and is a word prohibited from broadcast on Japanese TV and radio.
According to the Japanese Wikipedia entry for Katawa shoujo, the staff current making the game said that they didn't have any ill intentions when they choose the naming "Katawa" and apologize for any misunderstandings caused.

I too had similar bashings from the Japanese community when I used "jap" instead of "jpn" in the url for the language variable. I got a huge bashing from 2ch saying that I was a racist when I only chose "jap" because it was short for "jap-anese."
So now you know - never refer to the Japanese language or people as "jap." I also usually delete any comments and banish members if I see continued uses.

Screenshots from the game below.