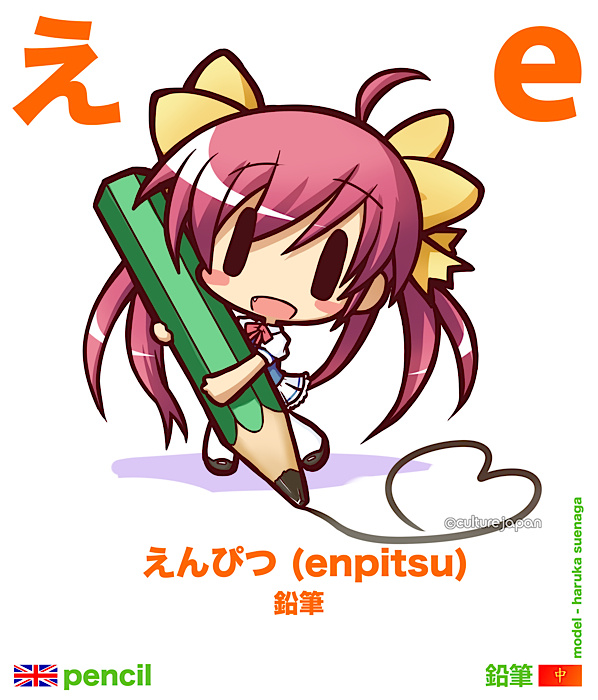 Have decided what to call these products - "Moekana" which is made from "Moe" + "Kana" where Kana is the word that describes the syllabic Japanese scripts "Hiragana" and "Katakana."

I only mentioned in the comments but these illustrations will be printed on karuta cards and sold as a pack. Bushiroad have kindly introduced me to the folks who manufacture their cards and should have these them ready by November 11 2011.
Also aim to have these marketed at younger children in Japan who already use karuta to learn hiragana. There's already some Puricure karuta on the market.

These will also be printed on a wall chart with all 47 kana and there will be some merchandise including apparel too. Am currently working on the Kanji charts too.

Following on from the previous hiragana which was う, today we learn "え" (e) which is pronounced like an abrupt "air". Today's word is "えんぴつ” (pronounced "enpitsu") which means "pencil". The katakana equivalent is "エ".
Today's model is Haruka Suenaga illustrated by Ikkyu-san.

You can use this in a sentence like:-
enpitsu de me wo kaku no wa yokunai kamoshirenai
えんぴつで目を掻くのは良くないかもしれない
It's probably not a good idea to scratch your eyes with a pencil

Write out "え” 50 times on the ceiling of your teacher or bosses house with marmite and say "え" 20 times at the counter when ordering some Mac Donalds.

Any other word that begins with "え" thats otaku or Japan related that you can think of?

All Hiragana in the Moekana series will be tagged "hiragana" 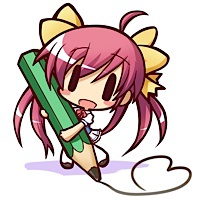