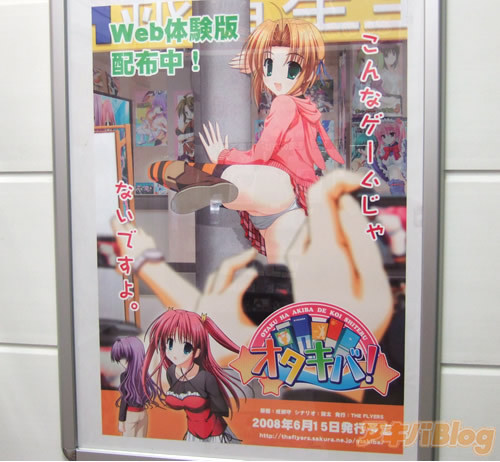 Hijacked from XSportSeeker who discovers an eroge of Mrs Wide Open and her shenanigans ^^;
Prefer the 2D version.

Original text from XSortSeeker below.Didn't know if this was a 2D girl post, or Otaku since it's related to the culture...

Saw it on Akibablog and thought I had to share with you guys.

Here's what they said about it:
"A poster of " Otakiba! Vol.1 –Otaku Yamemasu-" (-I'm gonna graduate Otaku-) was at Toranoana Main Branch. It's a doujin eroge by Circle The Flyers and sold only at Toranoana. It was announced in Otakiba Blog that the idea of this gag poster came from THE person." As we can see, it comes from the picture of the lady who showed her ass in Akiba."

ROFL, I was expecting for this, but didn't think it would come out so soon...

Almost forgot to mention... if you go to the akibablog website, they have the original pic of miss wide open... they made an almost exact replica, including hands position, cameras and stuff.