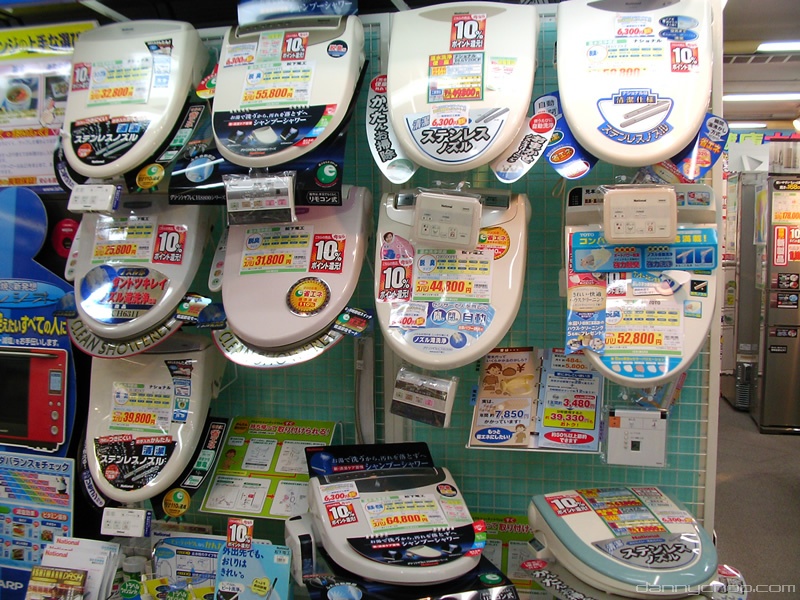 Once upon a time, the Japanese used to use a small wooden stick called Chugi (photo here) to wipe their bottoms. It wasn't until the Meiji period when they gradually started to use toilet paper.

Toilet paper wasn't available during the Meiji period and folks had to import it!
I think people got fed up of using those Chugi sticks because some people mistook them for chopsticks and then realizing while they are eating breakfast that they were not chopsticks (chopsticks otherwise known as "ohashi" in Japanese) but elder brothers personal Chugi. The victim thinking "no bloody wonder there was dried corn on the end of that Chugi..."

The Japanese finally got bored of using toilet paper and invented the washlet. Basically what happens is that once you have finished your morning dump, you press a button and a stream of water shoots your back door to remove bits of poo and undigested spinach. You can see one in action at YouTube.
Rather than spread around the peanut butter with paper, one can strategically take out the offensive object just like MGS Snake with his sniper rifle on a dose of diazepam.

While a bidet does offer similar functionality, you have to actually move over to it and risk dropping some waste in the process. One could slip on the poo and hit ones head on the toilet rendering one unconscious – or worst still ones head could end up in the toilet.

Took this photo in Akihabara and you can see that a washlet is basically a combination of toilet lid/seat that you can fit to most toilets. Some of them have control panels that you mount to the wall and some even have SD Card MP3 players.
Most of these cost 25000 yen upwards but if you cant afford that then you can always go for a portable version which you can carry around with you.

I remember when I first came to Japan and tried one of these – nearly jumped out my seat. If you are over here, you should try it at least once!