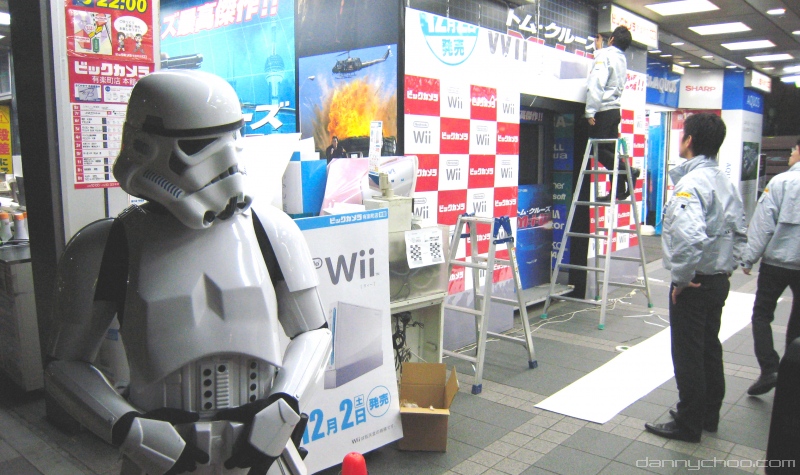 Update: Hector uploaded his coverage of the Wii Launch shenanigans - check out his blog for other great photos of Japan (he likes taking pictures of girls without them knowing ^^;)
Looks like Ascii got me covered too in their report.

Its a tough job but somebody has to do it - entertain the poor souls lining up for their Wii. I say poor souls because it was freezing out there - I was wearing 3 layers of Under Armor and was still cold!
My Wii, Zelda and Super Monkey Ball should be arriving today and will bring you a review after (tomorrow or Monday).

Spent the evening with Hector from Kirainet and an independent Spanish film crew going round the Wii hotspots. After being shooed away from Yodobashi in Akihabara, we went to Bic Camera in Yurakucho. One guy at Bic guy tried to shoo us away using a gesture that you would use to shoo away a dog but we ignored him because he looked like a weakling.

Unlike the crowds at Shinjuku for the PS3 launch, there were a ton of TV crew interviewing the crowd. I was interviewed live on Nippon TV for a program called News Zero ( Thanks to Eddie for the screencap ) and for another program on the same channel called Zoom in Super which is apparently due to air next Monday morning at about 7.40AM. Left the scene at about 1AM after the interview - 7 hours wearing armor in the cold was enough for me for one day. 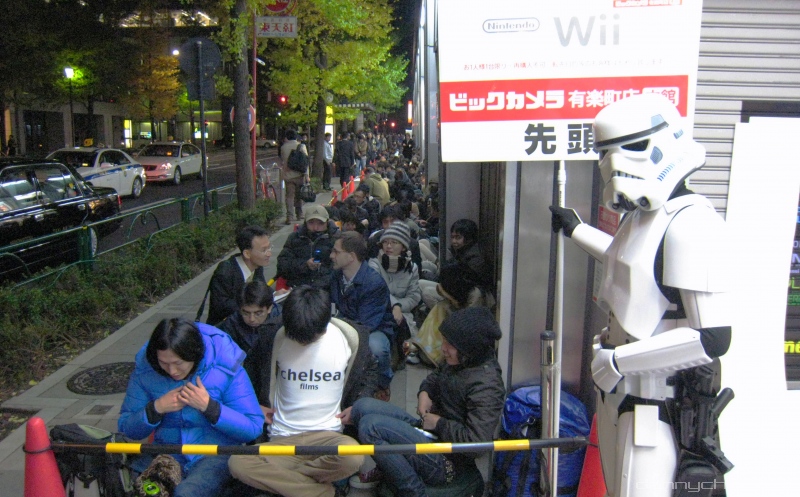 The front of the queue. I read that folks were not allowed to line up outside Bic Camera but today there was a civilized bunch of folks huddled together waiting in line. 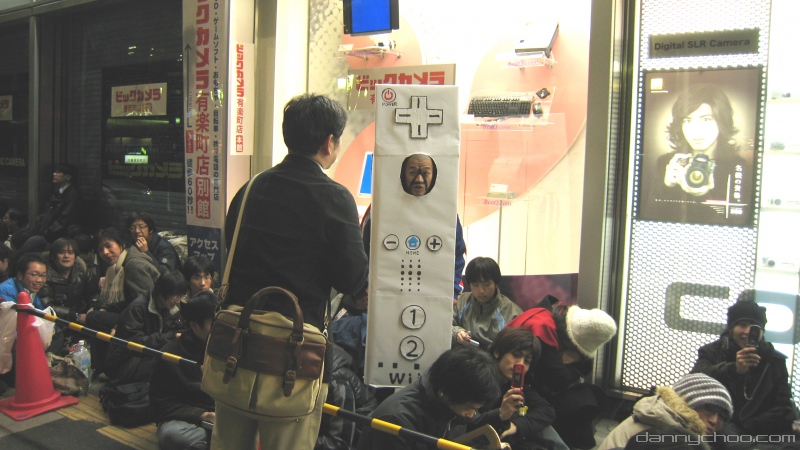 You may have seen the US version of a person dressed up like this taunting the PS3 crowds. This guy was just waiting in line but he must have been freezing wearing just a cardboard box. When asked if he was going to sleep standing up - he said yes and closed his eyes. 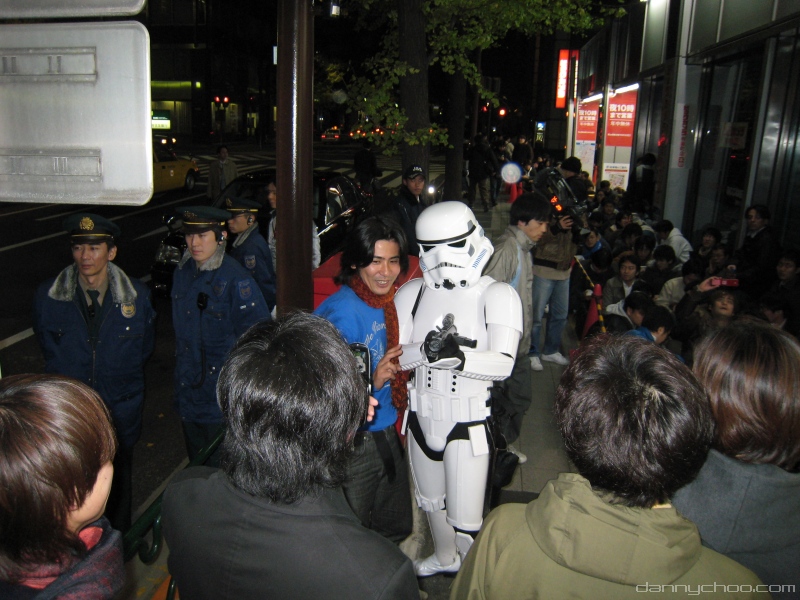 Entertaining the media and folks in line. Folks were kind of like caged in boxes like animals - well I suppose we are all animals in some way. 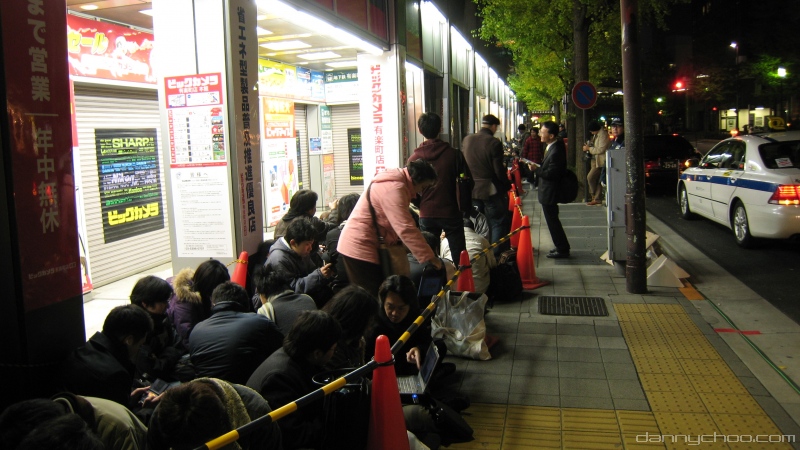 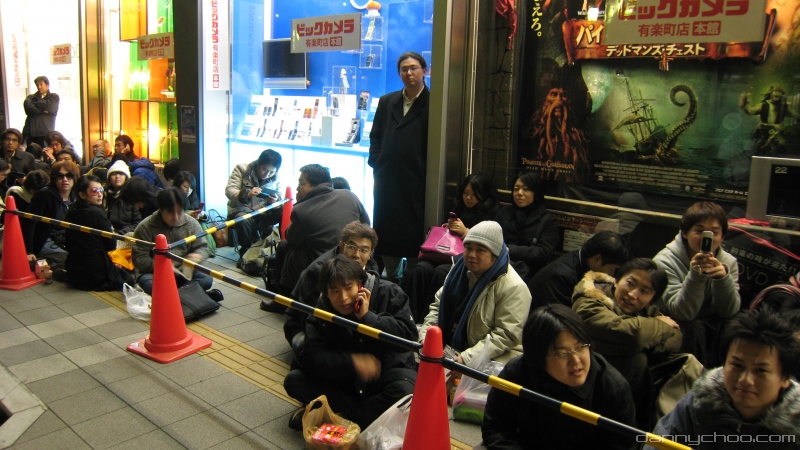 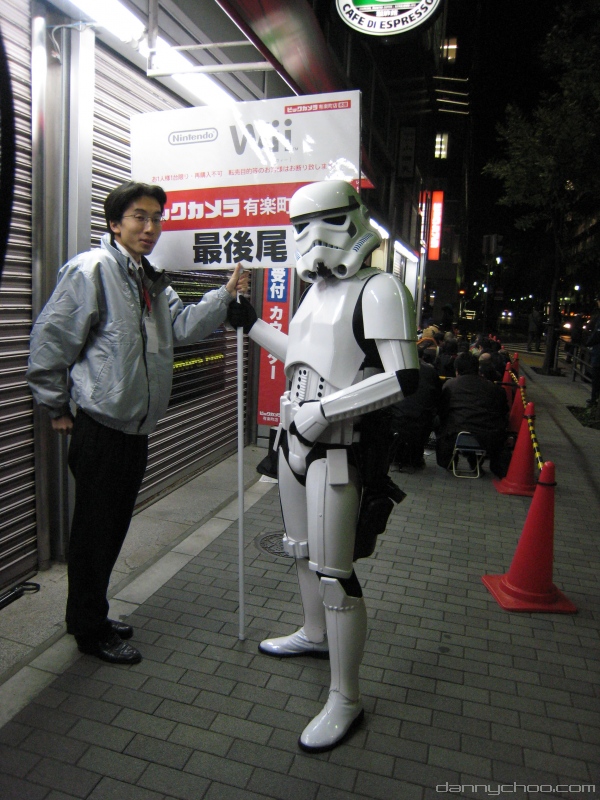 Back of the queue.
I didnt feel the PS3 fever that was felt last time. It could be because Nintendo made loads of Wii so there was plenty to go around. Or it could be that the Nintendo bunch are just a quieter crowd.
More Wii when its gets here.
More Wii launch coverage at Kotaku.